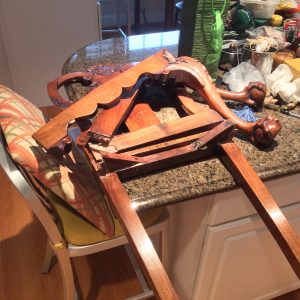 The chair broken into pieces. Note the snapped mortise and tenon joint.

During a recent move, one of the movers tripped and fell. Fortunately, he was uninjured but the antique chair he was carrying did not fare so well. It was shattered into many pieces and the mortise and tenon joints between the legs and seat were broken. There were also numerous scratches and abrasions to the wood and finish.

The chair was made during the reign of George II of Great Britain (1727-1760) from the newly fashionable wood of the Cuban Mahogany tree. This refined and beautiful piece featured delicately carved ball and claw feet and carved foliage on the knees of the front legs and on the crest rail of the chair back.

Although the chair has been refinished (probably many times) the wood has had time to develop the lovely light golden brown patina of aged mahogany. This patina only extends to a depth of a few wood cells. If these are sanded through during refinishing, the original intense red of the mahogany is revealed.

Over many years of light exposure this red will again fade to a lighter, golden hue. Fortunately, this chair has never been subjected to heavy sanding and the original crispness of the carving is still intact.

The most serious challenge in the restoration of this chair was to re-build the broken mortise and tenon joints in such a way to remove a minimum of the original wood while producing a strong joint. First, the broken wood was chiseled from the mortises or slots in the chair's legs. 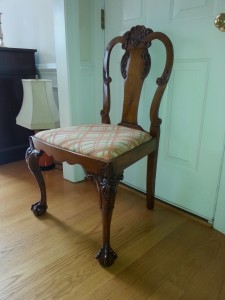 The chair rebuilt, French polished and ready for use.

Next, a slot was chiseled into the underside of the seat's rails and a thin slab of mahogany, the tenon, was glued in place with hide glue. This tenon projects beyond the ends of the chair rails and glues into the mortises of the chair legs.

Once the chair had been re-assembled, several small areas of missing carving were filled with mahogany infills and carved to match. These fills and the scratches and abrasions were carefully matched to the surround mahogany with artist colors.

The repairs were then sealed with clear lacquer. Finally, the finish received a coat of French polish to provide an even sheen over the entire chair. The chair is now none the worse for it's experience and ready for another 250 years of enjoyment!