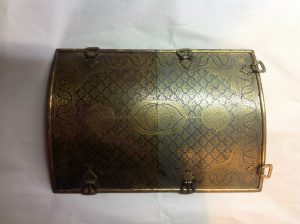 Armor plate during restoration. The left side still has degraded shellac and red areas of rust. The right side shows the color of the original patination and the largely intact gold decoation

Although wood is the primary material encountered at Capital Restoration, our craftspeople are also skilled at the restoration of metal artifacts. A complex and challenging example is an Indo-Persian suit of armor, dating from about 1800. Consisiting of a helmet, arm guards, breast plate, back plate and a shield, it was largely intact including the cloth padding behind the plate armor and shield. Originally, the suit would have also have included an axe or mace (metal club). This armor is a show piece, intended for ceremonial use and is elaborately decorated with gold. It’s very small size indicates that it was made for the child of a high ranking individual.

The armor is hammered out of steel sheets and heat treated to produce a dark blue/grey patina. The craftsmanship is of a very high order with beauiful symmetry. The gold decoration is very fine and detailed. Gold powder was mixed with mercury and brushed onto the steel which was then heated causing the mercury to flash off and amalgamating the gold to the steel. Unfortunately, the armor was stored in damp conditions for many years and the steel  oxidized and much of the gold was covered over with rust. Shellac had also been brushed over the metal in an ill advised attempt to protect the metal. The shellac had oxidized and darkened.

The first step in conserving this artifact was to carefully remove the cloth padding and place it in protective storage. Some modern wire which had held parts of the armor together was also removed. Rusted chain mail attached to the back of the helmet and the arm guards was treated with a solution of phoshoric acid and tannic acid powder diluted in ethanol and distilled water. The dirty, degraded shellac was removed from the steel plates with denatured alchol. The rust on the steel plates was treated a small section at a time by covering it with phosphoric and tannic acid and gently rubbing the rust with a miniature fiberglass brush. Great care was taken not to detatch the gold fire guilding which was found still largely intact, underneath the rust. The metal was rinsed with distilled water and thoroughly dried with a hair drier. The final step to treat the metal was to coat it with microcstalline wax and buff gently. The cloth linings were then stitched back onto the armor with cotton thread.

The phosphoric acid forms a stable phosphate layer which resists further corrossion. The tannic acid replicates the dark heat patintion of the steel which provides a more uniform apperance between the areas of treated rust and the orignal patinated steel. Much of the gold decoration was still found to be inact undeath the iron oxide and could be preserved although a small amount of gold had no stable substrate to adhere to so could not be saved. Many years of handing and cleaning wore away much of a thin wash of gold from the edges of the shield and raised areas of the arm guards. Overall, the suit armor is remarkably intact and provides a beautiful example of the armorer’s and gilder’s art.